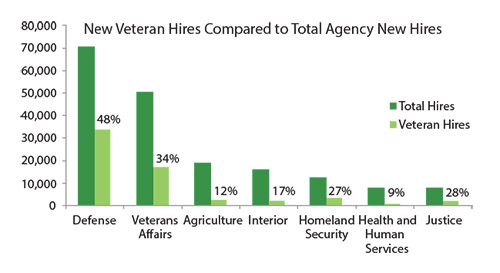 The good news for job seekers is that the federal government is hiring again. But two cautionary notes are in order. First, the federal government’s hiring process remains lengthy. Second, military veterans receive preference in hiring by law, which makes it more challenging for non-veterans to secure a federal job.

An official of the Office of Personnel Management (the federal government’s human resources agency), testified in 2016 that such preference is part of a larger effort “to honor veterans for their service and sacrifice in defense of our Nation, including assisting them in re-entering civilian life and finding employment.”

The data in this article are drawn primarily from a November 2016 report from the Office of Personnel Management. Unless otherwise noted, they relate to 2015. Please see below for a link to that report and a note on methodology.

From a job seeker’s standpoint, the share of new hires who are veterans is even more important than the share of total employees. Overall, veterans accounted for 33 percent of all new federal hires. Again, there was a wide variance between agencies. At the high end was Defense (48%) and at the low end was Health and Human Services (9%).

Possible Reasons for Differences Among Agencies in Hiring of Veterans

I did not find any convincing explanations of the wide divergence among agencies in the percentage of their total employees and new hires who are veterans. However, some possibilities include differences in the transferability of skills from the military to civilian agencies, agencies’ cultures, and agencies’ diligence in implementing veterans preference.

If you are not a veteran, your chances of landing a federal job (other things being equal) are far better at agencies that hire a smaller share of veterans.

A note on methodology: The Office of Personnel Management’s most recent annual report on the hiring of veterans was issued in November 2016. This report, entitled “Employment of Veterans in the Federal Executive Branch,” may be accessed at https://www.fedshirevets.gov/hire/hrp/reports/EmploymentOfVets-FY15.pdf. The years cited are federal government fiscal years (October 1 through September 30). The report covers all 15 cabinet agencies and nine other agencies. It does not cover the Central Intelligence Agency (CIA), National Security Agency (NSA), Tennessee Valley Authority (TVA), and certain other agencies.